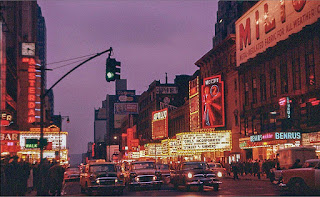 There are two kinds of pubs in the theater district. One is the kind with the ten-foot-tall illuminated shamrock hanging from the eaves and a fake Irish name blinking three stories high in carnival lights. These tend to be deserted after about 9 pm because their clientele needs to get up early to see the Statue of Liberty, Empire State Building, Central Park, Chinatown and the 9/11 memorial before lunch.

Then there’s the smaller, darker, grumpier kind, where waiters and bartenders and busboys shuffle wearily in at the end of their shifts to share the space with the writers and actors and stagehands who still work in the neighborhood. I’m usually there around 11:30, alone at the bar with a book and a beer, trying to remember who I am.

I’m reading a book on my Kindle and the screen’s artificial glow feels intrusive and embarrassing, out of place in the grungy noir. And then Peter Dinklage slides up to the bar with his laptop.
It isn’t really Peter Dinklage – too tall – but his face and his beard and his swagger are similar enough that I have to look twice to check. It’s New York, after all, everyone has a celebrity sighting story. That is, everyone except me. I’ve been here for ten years and the only famous people I’ve ever seen have involved me buying a ticket beforehand. But Peter Dinklage calls out in a stranger’s voice to the bartender who grins and slaps him on the back, and pours him a pint of his usual. It’s just a doppelganger.
I feel stupid reading on a tablet, but the doppelganger has his entire MacBook Pro open on the bar and crouches over it like a junkie about to snort a line. Art-house photos of young women in heavy eye makeup fill the screen. There’s a girl in a white dress on a crumbling fire escape, a redhead on the edge of an unmade bed, a blonde staring into the camera with the expression of either a murderer or an obsessed lover. His hands twitch and flutter over the keyboard and trackpad as he adjusts the lighting, adding and taking away shadows and editing flecks of light into their eyes. Caravaggio walks among us.

My phone buzzes with a text notification. It’s one of my musician friends. Are you on 46th? he asks. I just realized I still have your drum.
We had spent half the summer scheming and rehearsing for a grand multi-disciplinary show that would span six centuries of classical and popular music, Mediterranean mythology, and assorted mystical poets. Clearly it never even made it to previews, we were full of ideas but short on practicality, and somewhere in the middle of that my Salentino frame drum ended up in the back of his car, lost for months.
He texts me an address. It’s one of the pubs with the neon shamrock stuck on the façade.

Crossing from Ninth to Seventh Avenue is like going from one planet to another. Ninth is dusty and rough, garbage trucks rumble past honking their horns and every block has ten bars and all the bars are full of regulars. The arched steel beams of the elevated freeway and tracks leading to the Holland Tunnel loom over the street casting post-apocalyptic shadows and making the night just dark enough to hide in.
Three hippies run past me laughing and thrust a single sunflower into my hands. “It’s free!” shouts one. “Happy Thursday!” And they’re gone, leaving me holding the prickly stem.

A rusty van rolls by with its windows down, Bollywood bhangra music blasting loud enough to shake the sidewalk. Ahead, the electric glow of Seventh Avenue lights up the sky. I’m surrounded by a crowd of tourists staring upwards, helpless in wonder before the myth in glass and steel around them. I’m just drunk enough that instead of being irritated I’m moved, and I see poetry everywhere. The city as a living being, full of Caravaggios at the bar, sunflower hippies, bhangra vans and pilgrims chasing their own big story in the city where everyone tells them dreams come true, the lights get brighter and brighter and someone get me a pen and paper before I go mad –

I walk into the deserted fake-Irish pub and see my friend sitting with a dozen other studio and session musicians at a long table in the back. An actor I recognize from a famous early-2000s drama – there we go, finally - is sitting next to him, arguing some arcane point about bass levels. I sit down and order another pint. The musicians at the table are all a generation removed from me and are trading war stories with the easy camaraderie of those who know they have already made it, and who grew up in a time when the neighborhood studios were always busy and the union had your back.

Eventually, I get my drum back. This drum has already taken some long strange trips with me – wandering the wrong way down a foggy road outside Melpignano after the Notte della Taranta, sleeping on the floor of the last train back to Lecce – and now here we are in another deserted city. The lights are still as bright as ever but shining for no one, the streets are suddenly empty. Even Times Square eventually sleeps. 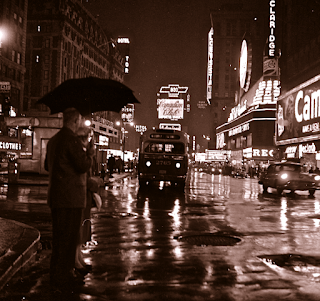 Two stories underground, the night train hurtles past without stopping at my station.

Popular posts from this blog 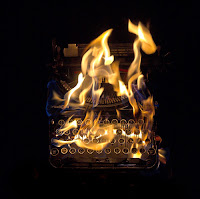 So I'm fascinated with typewriters at the moment. A classic case of medium overshadowing message, but I'm convinced that a typewriter would make me a better writer. Just me and the page and the ink smudges, no Spotify or Twitter to distract me, a forced slowing down of time. A return to the era when writing meant something. I would instantly become Truman Capote, Ernest Hemingway, Zelda Fitzgerald. My editor would come around in a pinstripe suit and newsboy cap, gnawing on a cigar, and the authenticity would be transcendent. Unfortunately, typewriters are both expensive and impractical, so I did what any good twentysomething would do and found a typewriter simulation app for my computer. It's called Winston. It shows you a graphic of a typewriter with animated paper (you can set "pristine", "sepia" or "crumpled") and makes old-fashioned clickety-clack sounds as you type. The carriage return dings its little bell. Hitting back-space pr
Read more 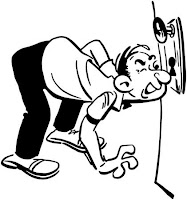 You always have to be careful around writers, my friend laughs during a presentation of his latest novel. They steal everything you say, especially from other writers. The moment you start telling a story – “Oh man, guys, you’ll never believe what happened to me the other day-“ they turn to you with this little gleam in their eye, l’occhio del ladro, the eyes of a thief. “Oh?” they say. “And just what did happen to you the other day?” “Uh – nothing, I swear!” Bad writers borrow, great writers steal. I’m pretty sure I’ve both appropriated and misquoted that line from Stravinsky. Who took it from T.S. Eliot, who I would call the original source if he hadn’t probably lifted it from someone else anyway. I’m not a writer, but I want to be one someday. This blog is my gym and sandbox: the current objective is simply to get ideas on the page and hit “publish”, exposure therapy for the terminally self-critical. I deliberately make my terrible first drafts see the light of day be
Read more 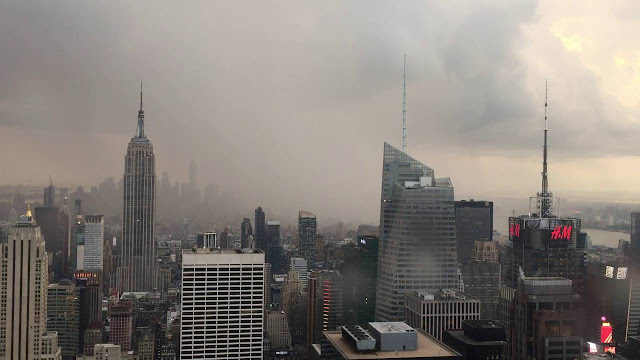 March 31: 1 train, 8 AM. In the station: me, drunk man swearing at the air, nineteen MTA construction workers slowly arguing. No one seems to know if the train is running or not. April 20: On the train uptown. Two older ladies, strangers to each other, in adjacent seats. One turns to the other and asks "Excuse me, can I just ask you a quick question?" Other nods. I see what's coming a mile away. "Do you have a relationship with God Our Father, and do you understand why we call him Father?" This was at 59th street. We're at 125th now and she's switched to Spanish, but as far as I can tell she's recounting the entire story of Emperor Constantine's battlefield conversion. April 22: My building super, my hero who stopped an invasion of rats, is from somewhere in the remains of Yugoslavia. My neighborhood is highly Spanish-speaking. I'm at home at my desk, and amid the sounds of general puttering going on outside my window, comes a
Read more